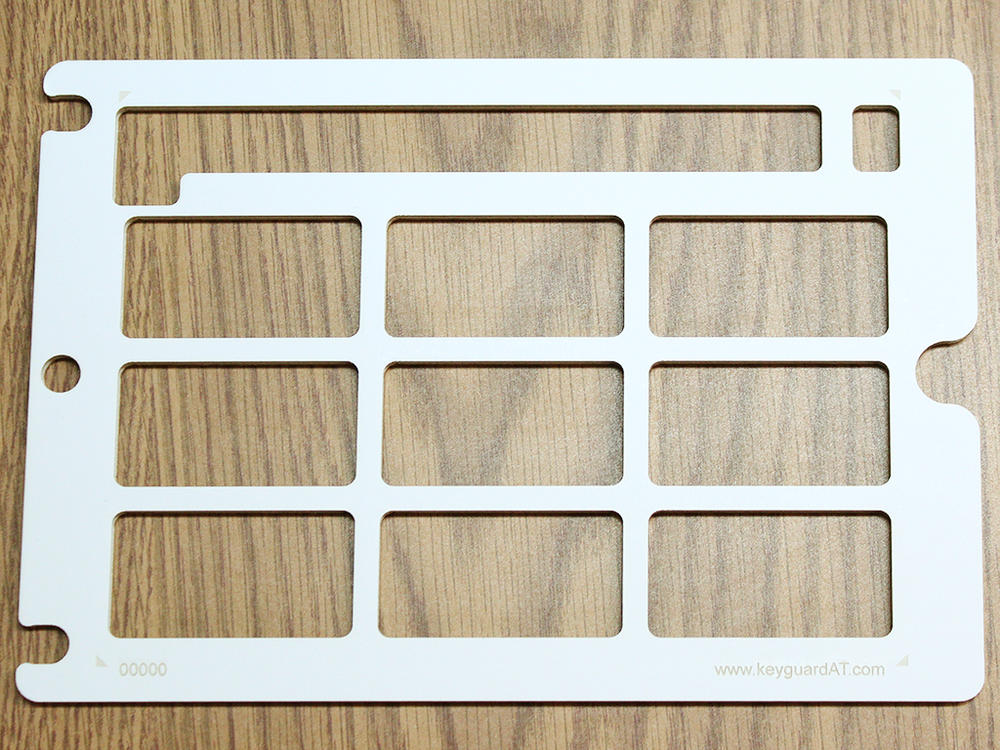 This temporary keyguard allows you to test the suitability of a keyguard for a TouchChat user.  The keyguard uses the same design files as our regular keyguards, so you know it will fit the layout of the screen perfectly.

Temporary keyguards are laser cut from 1/8" foam board, the same thickness as our standard keyguards, so you can see how the end user will deal with the size and depth of the openings.  The keyguards do not fit any particular case, and they're not intended as a permanent solution, so they don't come with any attachment method.  You attach them with a temporary means like tape or Blu-Tack.  Suction tape is an excellent, more reliable attachment.

There are two styles from which to choose:

This keyguard supports different designs based on user settings and preferences.  Each of these affects the positioning of items on the screen, and thus the design of the keyguard itself.  Your temporary keyguard will be truly custom-designed to match every one of the choices you make for the end user.

TouchChat Version - Specify which version of TouchChat you are running so we know which version of the layout to use.  Unless you're on an older iPad that cannot be upgraded, you should probably choose "2.26 or newer".

Layout - If you're using a standard TouchChat layout like WordPower without alteration, select the layout here.  If your layout is not listed, or if you've changed the number of rows or columns, choose "Other Grid".

Rows and Columns - If you chose "Other Grid" as your layout, specify the rows and columns here.

Status Bar - In the Page Size section, near the top of the Settings screen.  You'll only have this option in TouchChat version 2.10.3 or later.  If you have an earlier version, answer "Off".

Keyguard Inset - In the Page Size section, near the top of the Settings screen.  When on, this setting causes extra whitespace at the top and bottom of the screen.  It makes the keyguard stronger, so we don't warranty the keyguard against breakage if you turn Keyguard Inset off.  If off, we may also have to put a vertical reinforcing bar (or two) in the middle of the speech display, depending on the size of the case opening.

Speech Display - The first setting in the Speech Display Bar section.  Select "Open (Visible)" if you want to show the text and/or icons at the top of the screen as the user types.  Don't be confused by the double-negative in the setting name.  Hide Speech Display off means it's open!

The following three settings, also found in the Speech Display Bar section, only apply if the speech display is open.

Show Icons - If this setting is on, icons will be displayed above the text in the speech display.  Note:  If the number of lines (below) is greater than 1, the Show Icons setting goes away.

Font Size - Choose whatever you have for this setting.  If you specify a font size other than what you have in the settings, the keyguard won't fit.

Number of Lines - Select how many lines of text you want the user to be able to type in a single "sentence".

Button Margin - This is the last setting in the Buttons section.  Button Margin controls the size of the space between the cells.  If you make the button margin smaller than what we recommend, the keyguard will cover the edges of the cells.  That is not serious with a clear keyguard, but why not give the user an unobstructed view of the entire cell?  The larger the button margin, the more space between the cell openings, and the stronger the keyguard, too.

How the Button Margin works has changed several times in the app.  If your TouchChat version is

Be sure to try the Button Margin setting on your iPad before ordering, so you are not surprised by what it does!

Openings for Menu and Vocab buttons - This is not a TouchChat setting.  Just indicate if you want openings over these two buttons in the green bar, Vocab, Menu, Neither or Both.  If they're not open, you will not be able to use them without removing the keyguard or rotating the iPad.

Cell Openings - The default cell openings are rectangles with rounded corners, the same size as the cells. Elliptical openings are the same size as the cells.  If you choose square or circular openings, they will be centered in the cells, reduced to fit in the cell. The extra space helps the user differentiate between the cells, and allows a little place for fingers to rest. If you choose anything other than full-sized rectangles, do not choose a colored material, as some information in the cells will be covered by the keyguard.

Reduce Openings To - By default, openings will be made as large as will fit the cell.  If you specify a maximum opening size, the dimensions of the grid cells will be reduced so they are no bigger than the maximum you specified.  If the cells would naturally be 1" wide and ".5" high, and you specified a maximum of  0.75", the cells would be reduced to 0.75" x 0.5".  Round or square openings are reduced in both dimensions to the specified size.  If the cells are already smaller than the specified size, nothing will change.

Special Instructions - Use this field to communicate any other information we need to know about the keyguard.